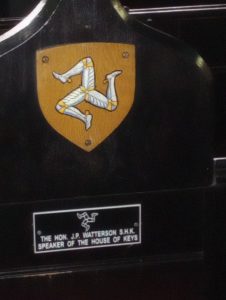 After having to be postponed for 2 years we were eventually on our way to the Isle of Man. First planned for May 2020 just before lockdown, we at last had the go ahead and once we were all on the coach we settled in for the long journey to Preston with some scheduled stops on the way. We had a lovely stop at Waterperry Gardens for coffee and a bite to eat. The weather was fine and we continued towards Preston and stayed overnight at an hotel in Samlesbury.

Our driver, Doug, advised us that our planned trip around Morecambe Bay the next morning would not happen as the timing of our ferry had been brought forward from the afternoon and we were to catch the 8.45 a.m. twin hulled ferry, so after an early breakfast on Monday we were off to Heysham. I think a lot of us were very impressed at the way Doug manoeuvred the coach onto the ferry, he reversed it all the way! The crossing was a little less than smooth, but was at least shorter, 2.5 hours. When we arrived at Douglas it was raining very hard but we were only a short distance from the port. We were staying at The Embassy Hotel right on the waterfront and after settling some went in search of some lunch. Although it was raining some of us went for a walk to stretch our legs.

Most evenings, there was piano music and singing in the bar which was very sociable.

Tuesday we visited Laxey, north from Douglas, and took the railway up to the summit of Snaefell. We couldn&#39;t really see much of Laxey Wheel as it was being refurbished and seemed to be wrapped in protective plastic, but some of us went into the disused mine where it was possible to see the remains of the metal which had been mined. At the top of Snaefell it was at least dry, a bit cloudy and very windy. There was time for a look around and photos before heading back down to Laxey where there was a lovely shop stuffed full of arts and crafts supplies and also providing snacks. The weather stayed fine and we went on to visit Castletown, in the south of the island, where we spent a pleasant couple of hours. Some group members had got off the coach to visit the Murray Motor cycle museum, which was full of fascinating memorabilia from posters to badges and autographs as well as rows and rows of amazing motor bikes. Some of them were taxed and insured to be ridden on the public roads by the owner. We returned to Douglas and the hotel in time for our dinner and a cheerful evening.

Wednesday we went to St John’s where we visited the Tynwald, the government of IOM. We looked inside the building, which was very impressive with some beautiful woodworking. We then travelled to Peel on the other side of the island. The weather cheered up and it was beautifully sunny. We then went on to Cregneash National Folk Museum to see some very old cottages. We had two lovely guides who provided us with a lot of information, and before returning back to the hotel we called at The Heel of Man, where we did some seal spotting and there were beautiful views especially in the late afternoon light.

Thursday, our last full day before the return journey, we travelled to Ramsey. The journey towards the town was very impressive, the approach from the top of the hills down to the plain was really lovely. There was a lovely boating lake and an impressive bridge across the Sulby River. On the journey back to the hotel, Doug drove us along a large part of the TT Race course, obviously at a much gentler pace, it was good to see the route, especially as a lot of preparations for the race were underway. On several of our journeys we crossed what is know as the Fairy Bridge and tradition asks that everybody says hello fairies when crossing it!

We had a pleasant last evening at the hotel.Friday came too quickly, an early start as we had to be at the terminal for 7.45 a.m. at least the weather was fine and we were to travel on a much larger ship and the stability was so much better. Journey time was longer but more comfortable. Once back in Heysham we got underway for the very long journey back. We left Heysham around 1.00 p.m. and after an uneventful but pleasant journey we arrived back in Alton before 8.00 p.m.

A really great holiday, impressive countryside and pretty. We all look forwards to the next holiday 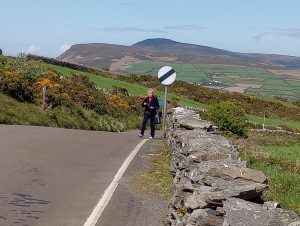